skip to main | skip to sidebar

Summaries and reviews of fiction and nonfiction books by Korean American authors,
books about Korean Americans and Korea, and Korean literature in English translation,
including some academic works and a sampling on the Korean War 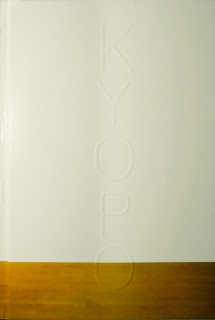 The Kyopo project by artist Cindy Hwang is a five-year photography and textual endeavor that explores and exposes the breadth and individual depth of people “of Korean ethnic descent and living outside of Korea,” from which the acronym derives. Several of CYJO’s KYOPO photographs are on exhibition as part of the Smithsonian National Portrait Gallery’s “Asian American Portraits of Encounter,” October 12–October 14, 2011. The photographs line the main hallway of the exhibition, while about eight side galleries feature other Asian American portraiture works, all of them equally stirring and evocative.

This massive book delves deeper than the exhibition can, presenting more than 200 individual photographic portraits, all in a similar pose, in the exact same setting with same lighting, and, most strikingly, of a similar scale. While these elements serve to give a surface uniformity to the book, what rises is the distinct individualism of the members of this grouping, both visually and with textual information. Photographs are displayed on the left while on the right are text blocks of their name, occupation, where they were born and where they live, and a few paragraphs of their response apparently to a question about KYOPO identity.

This is a stunning photographic and textual work, capturing five years in the cultural phenomenon of “Korean America.” An insightful foreword by Marie Myung-Ok Lee (author of Somebody’s Daughter), and an introduction by Julian Stallabrass further explore the impressions and content of this work.